The ICT sector has always been Taiwan’s source of pride. Since the 1980s, Taiwan has been highly regarded as a vital player and major procurement centre for global ICT companies and buyers. Taiwanese companies hold huge market shares in semiconductors, PCs, mobile devices, broadband appliances and display products and technologies and is the world’s biggest supplier of these products, contributing 16.5% of the total GDP in Taiwan. Taiwan recently launched its Digital Nation and Innovative Economic Development Plan (2017-2025), "DIGI+", which aims to grow Taiwan’s digital economy to US$205.9 billion by 2025. Driven by the emergence of the Internet-of-Things (IoT) and smart technologies, Taiwan hopes to transition away from the OEM and high tech manufacturing model that has sustained the country for decades.

“Our energy and resources are limited, and our economy lacks momentum, with the old model of OEM manufacturing facing a bottleneck. This country urgently needs a new model for economic development,” Taiwan President Tsai Ing-wen (蔡英文) said last year in her inaugural address. “We will promote a "New Southbound Policy" to elevate the scope and diversity of our external economy, and to bid farewell to our past over-reliance on a single market,” she added.

Under the pillar for IoT is a flagship program called the Asian Silicon Valley Development Plan. The plan supports Taiwan’s goals of increasing its global IoT market share from 3.8% in 2015 to 5% in 2025. which according to Gartner’s projections could be worth US $11 trillion by 2025. Taiwan has made inroads with Microsoft and Qualcomm who have chosen to establish their IoT research centres in Taiwan. There are also over 140 organisations that have joined the Asia Silicon Valley IoT Alliance with a goal to further advance the industry.

However there have also been challenges. Taiwan manufacturers mostly rely on bulk orders from a handful of major clients, Foxconn and Apple being the most well documented. This demand driven mindset impacts Taiwanese companies ability to tailor solutions, invest in R&D and develop a market strategy for it.

The lack of overseas experience is a critical stumbling block to both the ASVDA’s efforts to nurture IOT industry, and the DPP government’s New Southbound Policy.

Taking Taiwanese companies out under the Southbound Policy and exporting IOT solutions will involve providing on-the-ground expertise, a service Taiwanese firms are generally not familiar with providing.

Charles Reed Anderson, former Asia-Pacific IOT analyst for IDC and founder of an eponymous Singapore-based IOT consultancy pinned down the issue. “Taiwanese companies, ECS for example, are often strong in-country but not regionally or globally,” said Anderson. “They need to expand their reach through partnerships with operational technology vendors, or at least partner more with global system integrators. That’s where the real money comes in. You have to find out what solution an industry or a specific enterprise wants to buy, and then partner with the people who own the decision maker. It’s a very complex sales process, and it’s not just going to be Taiwan vendors involved.”

The ASVDA is well aware of the literally breathtaking scope of the challenges it has been commissioned to meet. CEO Ming-Hsin Kung, who is also Deputy Minister of the National Development Council, has stated that 80 percent of IOT business opportunities will stem from so-called application services, which Taiwanese hardware OEMs are unfamiliar with providing, and which require significantly more investment in marketing, branding and R&D to realize. He has identified the isolation many Taiwanese SMEs have from international standards organizations, and thus their inability to capitalize on early market opportunities. And he has lamented the lack of synergy between businesses working in different sectors of the economy.

But Taiwan has not shied away from this daunting task. By participating in more international activities, Taiwanese companies are learning how to adapt their solutions in the changing marketplace. They understand that in order to escape the squeeze of wafer thin OEM margins, there is a strong need to move up the value chain through partnerships and R&D.

We had Taiwan pavilions for each of our 4 activities in Thailand, Malaysia, Philippines and Indonesia and they attracted much attention from local participants who are familiar with Taiwan's technology expertise. This snapshot of Taiwan IoT companies, is however, a small slice of the overall IoT capabilities the country is committed to build. 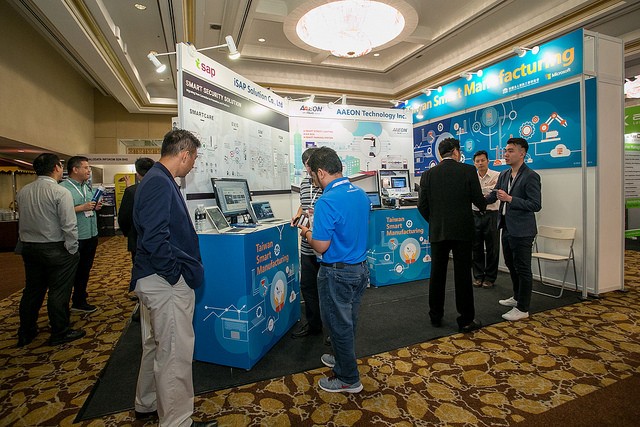 On 10-13th September, Taiwan will be hosting the 21st World Congress on Information Technology (WCIT) at Taiwan International Convention Center and the Taiwan World Trade Center. First held in 1978 by World Information Technology & Services Alliance (WITSA), WCIT is recognised as the premier international IT forum, where more than 2,500 visionaries, captains of industry, government leaders and academics from over 80 countries are brought together to discuss topics ranging from emerging markets and technologies to legal and policy issues, user perspectives, new business opportunities and developing political and economic trends.

As the second time playing host to the event, this is a chance for Taiwan to show the world it's readiness in pursuing the partnerships necessary to bring their IoT dream into fruition and an opportunity for international partners, especially those in Southeast Asia, to tap on Taiwan's expertise and build more comprehensive IoT solutions for their enterprise customers' digital transformation journey.