OOREDOO provides “Myanmar’s fastest mobile network”, while Telenor owns “the nation’s largest network”. MPT wants to be “moving Myanmar forward” – a reference to it being state-owned and having a mandate to “drive development” and “unify Myanmar” – and newcomer Mytel wants to deliver the best service in order to win over customers.

The advertising slogans in Myanmar’s telecom sector are similar to what you would expect in countries where the market has matured over a period of decades, from large phones the size of suitcases to feature phones and SMS, and now smartphones and streaming.

Myanmar is entirely different. In a classic case of technological leapfrogging, it went from almost no phones to predominantly smartphones in a period of a few years. Since two new operators from overseas launched five years ago, Myanmar’s telecommunications sector has grown at a rate that once seemed impossible.

In 2010, a SIM card from the state-run monopoly Myanma Posts and Telecommunications (MPT) cost US$1,500. Today, MPT and its competitors sell them for $1, and the International Telecommunication Union puts SIM card penetration at 114 percent in 2018. Competition is fierce: 1GB of data is typically less than 70 US cents, making Myanmar one of the most affordable places for phone use in Asia.

But to what extent have the companies that led the way in delivering cheaper SIMs and lower prices profited from this growth?

When Myanmar announced in 2012 it would open up one of the world’s final telecom frontiers, there was intense interest. Following a competitive and widely praised tender in 2013, Telenor from Norway and Ooredoo of Qatar were selected from a field of 12 bidders. They were promised milk and honey, a virgin market.

Now the gold rush is over.

There are two main reasons for this. First, the market has hit a certain saturation. “There are challenges of connecting those still unconnected, particularly poorer and rural communities,” said U Than Htun Aung, director of the Posts and Telecommunications Department, during the Myanmar Connect telecommunications conference in mid-September.

Put differently, the pie is not growing quickly anymore, and there are more companies fighting for a piece of it. 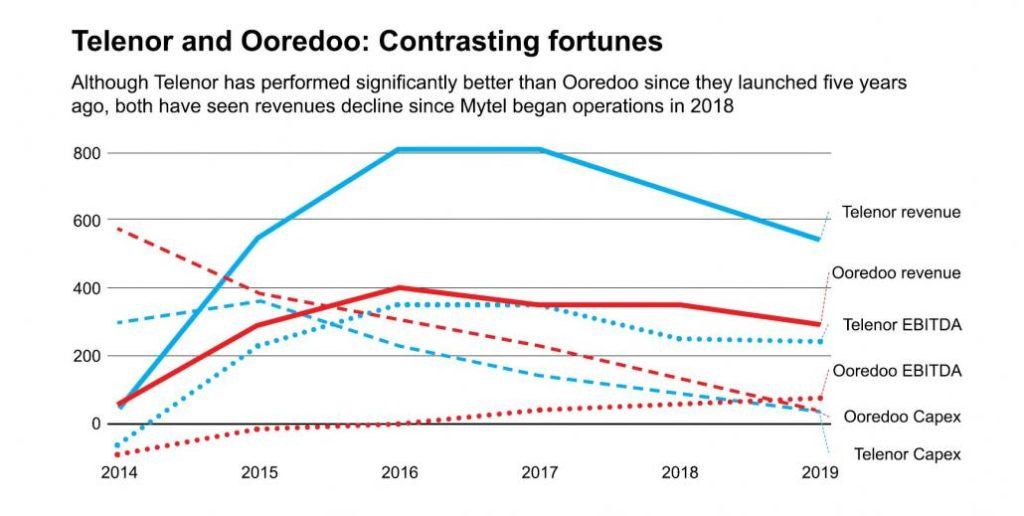 Golden years, for some

Before 2018, business was good – at least for one of the two companies that won the licence tenders.

Telenor’s Myanmar operation was profitable from 2015, its second year. In some years it has reported profits of more than $200 million – almost half the $500 million it paid for its 15-year-licence to operate in Myanmar.

The industry’s most used metric when assessing financial success is called EBITDA, which stands for earnings before interest, taxes, depreciation and amortisation. It does not take into account capital expenditure, which is why Telenor could post positive EBITDA in 2015, despite investing $660 million in infrastructure over 2014 and 2015. But these early results made it a perfect start for Telenor’s Myanmar business. Despite both revenues and earnings shrinking visibly since Mytel’s market entry, Telenor’s first five years in Myanmar have been golden indeed. EBITDA margins have typically hovered around 40 percent of revenue.

It has not been quite the same story for Qatar-government-controlled Ooredoo. To begin with, it bid twice as much as Telenor for its licence, putting it $1 billion in the red from the start. Its capital expenditure was also 43pc higher than Telenor between 2014 and the first half of 2019, at more than $1.65 billion, corporate records show.

In Myanmar, the Qataris have faced an additional, but difficult to quantify, challenge: anti-Muslim sentiment.

Shortly before the launch of Ooredoo’s network operations in mid-2014, the Myanmar Times reported that in northern Shan State, the Lashio township committee for Ma Ba Tha, the Association for the Protection of Race and Religion, had issued a statement saying “that the group and all of its members will never answer a call from any group or any person using telecom company Ooredoo.”

On a similar note, The Irrawaddy quoted nationalist monk U Parmaukkha as saying: “The campaign is to protect the integrity of the Burmese nation and the religion because we doubt that we will have freedom when talking over their mobile network because the company is from an Islamic country.”

One official from a mobile phone tower construction company, who asked not to be named, said that “hunting for land to build Ooredoo towers was a nightmare, especially outside the main urban areas. They had a harder time than everybody else.”

It could have been worse, though. Unlike in many other countries, where every network provider builds its own network, tower sharing is common in Myanmar, helping Ooredoo to circumvent this discrimination.

There were two other factors that put Ooredoo behind. First, there was the crucial decision to ignore 2G and only build out a 3G network. In 2013, 2G did seem like outdated technology. But Telenor’s decision to install both 2G and 3G was ultimately vindicated, as it helped it to attract millions of rural customers whose lower spending power meant they could only afford 2G devices.

Second, Ooredoo relied heavily on expensive foreign experts. In contrast, Telenor invested in training local talent and drew on foreign talent from its regional operations, such as in Thailand, who already had experience in Southeast Asian markets.

This combination of factors has resulted in Ooredoo attracting only 11 million customers, barely half the number of Telenor (around 20 million). Moreover, Ooredoo has only posted positive earnings for the past two years, but at a comparatively low level. After four years of heavy losses, Ooredoo’s EBITDA margin hit 11pc in 2017 and rose to 16pc the following year. In the first half of 2019, it hit a respectable 25pc. So long the problem child for the Qatar headquarters, it finally looks as though Ooredoo’s Myanmar branch is growing up.

What changed for Ooredoo that helped to turn things around? It appears to have revised its business model and significantly reduced operating expenses. Management recognised the mistake of not implementing a 2G network and added it to existing infrastructure. The company is likely to become more profitable over the years, industry experts told Frontier.

To read the rest of the article, please use this link: https://frontiermyanmar.net/en/after-the-gold-rush-fierce-competition-in-myanmars-telecoms-sector