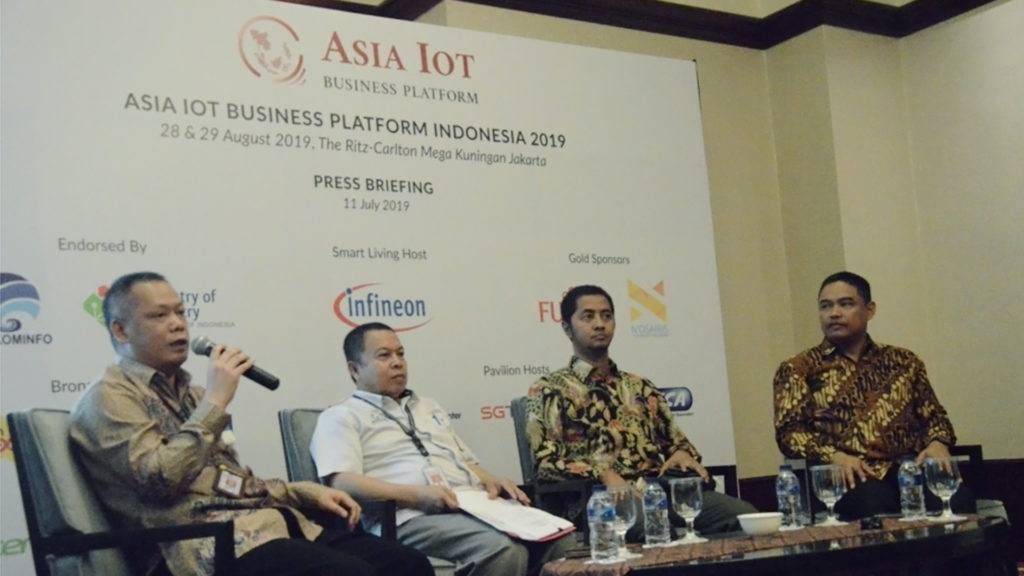 A media briefing was held this week as a preview to the 32nd edition of Asia IoT Business Platform in Indonesia this coming August. Local media partners were invited to learn about the latest development of enterprise Internet of Things (IoT) and digitalisation in Indonesia from main stakeholders which include government agencies (Ministry of ICT and Ministry of Industry), telcos (Indosat Ooredoo) and local enterprise (Kimia Farma, the largest pharma company in Indonesia).

We shared the results of the Asia IoT Business Platform (AIBP) Enterprise Survey, which involved 1,624 individuals surveyed across verticals and countries in Southeast Asia. Based on our enterprise survey, we have seen an encouraging trend where local enterprises in Indonesia have moved from fact finding and exploration stages, to implementation of IoT and digitalisation solutions.

Governments play a pivotal role in driving enterprise digitalisation in Indonesia and over the years, we have witnessed them pushing initiatives that aim to encourage enterprise digital transformation meet their goal of propelling Indonesia the top 10 largest economies globally by 2030. These initiatives, including Indonesia 4.0 and IoT Roadmap, are spearheaded by Ministry of ICT (MICT) and Ministry of Industry (MOI) as shared by Pak Hadiyana, Director of Standardisation from Ministry of ICT and Pak Najamudin, Head ICT from Ministry of Industry. They both agree that the role of government has evolved from policy maker and regulator to facilitator and accelerator.

Pak Najamudin believes that the industrial vertical would be one of the first few sectors that can reap the benefits of IoT and digitalisation and he invites both local and international solution providers to collaborate in driving the ecosystem in Indonesia. Pak Hadiyana further explained that MICT is ready to support the ecosystem too through simplification of license application process; it only takes a day now for a device license to be issued, a huge improvement from an average of a few weeks or even months in the past.

Our survey results also show that there have been a number of enterprises within the manufacturing industry which have reaped benefits from digital transformation. 11% and 9% of manufacturing companies surveyed in Thailand and Indonesia, report reaping benefits from implementing IoT solutions, far ahead of their counterparts in neighbouring countries.

“Based on our latest survey, we see that companies within the traditional manufacturing powerhouses in ASEAN, Indonesia & Thailand, have benefited most from implementation of digital transformation and IoT technology projects. This is consistent with what we’ve seen over the last 3-4 years as companies in these two countries have invested the most in technology and are beginning to reap the rewards now,” said Irza Suprapto, Director of Asia IoT Business Platform.

Pak Ferro Armando, Head of IT Support of Kimia Farma, shared that Kimia Farma has made digital transformation a priority under Pak Honesti Basyir’s, CEO of Kimia Farma, direction. They have started implementing IoT solutions in their production facilities including the one in Banjaran District in West Java, the biggest pharma production plant in Southeast Asia. He explained that the goals of adopting IoT are to reduce operational cost and time as well as to improve the quality of the products. He also pointed out that enterprises would need the assistance of solution providers and telcos to work alongside with them to bridge the gap between business and implementation of technology.

Responding to Pak Ferro’s remarks, Pak Hendra Sumiarsa, VP IoT and Smart City, Indosat Ooredoo, explained that telcos’ role in the digitalisation ecosystem has evolved too, not only providing connectivity infrastructure, but also assisting enterprises in crafting their digital transformation roadmap and architecture. He believes that collaboration among stakeholders is the key factor to accelerate IoT adoption and digital transformation in Indonesia.

With the support of MICT and MOI in Indonesia, the 32nd edition of Asia IoT Business Platform in Indonesia aims to bring local stakeholders to engage in business focused discussions around the opportunities and challenges within each sector.

Key topics that will be discussed include:

Drop me a note at [email protected] if you are interested to get more information or to be part of the Indonesian enterprise digitalisation ecosystem.