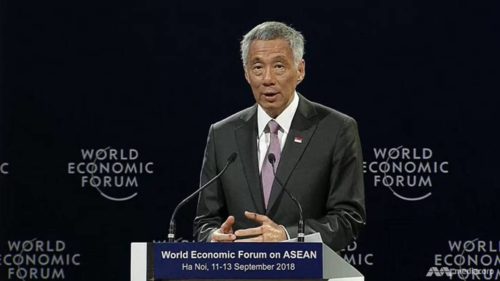 HANOI: The Association of Southeast Asian Nations (ASEAN) is in a “good position” to take advantage of the technological revolution, Singapore’s Prime Minister Lee Hsien Loong said on Wednesday (Sep 12).

Speaking at the World Economic Forum (WEF) in Hanoi, Mr Lee said the world is facing a “fourth industrial revolution” which is changing the way people and businesses function.

Developing new initiatives to prepare for the future economy is the way forward, Mr Lee said. The Prime Minister said technology is transforming old tasks and shaping the way the world functions. In the meantime, businesses are changing the way they operate while workers are using technology to be more productive.

Technological breakthroughs will no doubt become faster and even more advanced, he added. But the Prime Minister said he was confident ASEAN member nations can take advantage of the opportunities presented by this new environment.

By collaborating as a 10-member grouping, Mr Lee said he believed ASEAN will be able to strengthen its position and deal with future challenges, especially when the open rules-based multilateral trading system comes under increasing pressure and threat.

For one, Mr Lee said, ASEAN possesses strong fundamentals as it will become the fourth-largest economy in the world by 2030 after the US, China and the EU. Mr Lee said 60 per cent of ASEAN’s combined 630 million population is under 35 years old, and the young and educated workforce is comfortable with new technology.

The digital economy is projected to grow to US$200 billion by 2025, he added. He also said ASEAN is committed to further economic integration, an “important condition” for the fourth industrial revolution.

To read the rest of the article, please use this link: https://www.channelnewsasia.com/news/asia/asean-in-good-position-to-take-advantage-of-tech-revolution-pm-10708006