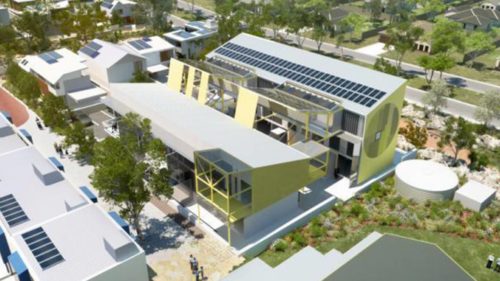 (Photo: A depiction of the White Gum Valley project developed by Power Ledger and its partners, Bangkok Post)

BCPG, the SET-listed renewable power arm of oil refiner and retailer Bangchak Corporation, is negotiating merger and acquisition (M&A) agreements with a set of renewable energy firms as it strives to expand abroad and capitalise on growing demand for green energy. The company aims to expand its market presence further in Australia, South Korea and Japan, as well as Asean.

BCPG also expects to increase installation of renewable power generation this year by an additional 100 megawatts, up from 600MW. Of the current capacity, BCPG has 400MW in renewable energy that is operational while the rest remains under construction.

BCPG’s ongoing development projects will begin operating in 2018, including a 12MW solar farm in Thailand, two solar power farms in Japan with 24MW each, a 14MW wind farm in the Philippines and a 158MW geothermal power plant in Indonesia. President and chief executive Bundit Sapianchai expects some new wind farm and solar power M&As to be concluded soon.

At home, BCPG is installing a solar rooftop under an agreement with a leading property developer, Sansiri Plc, with capacity of 30MW, up from 5-10MW at present. “BCPG is very keen on solar rooftops using blockchain technology, a part of the Internet of Things (IoT),” Mr Bundit said.

Through its collaboration with Sansiri, the T77 project on Sukhumvit Soi 77 will be Thailand’s first smart community. The project, on an 80-rai plot, will manage its own power supply through solar rooftops with the aid of blockchain technology. BCPG also has a strategic partner, Perth-based Power Ledger, which will bring peer-to-peer (P2P) renewable energy trading to Thailand. That will make T77 the first P2P renewable energy trading project in Asean.

He said the company plans to spend 7 billion baht over the next few years to generate 100-200MW, having signed an agreement with the Industrial Estate Authority of Thailand to apply blockchain at the IEAT’s industrial estates in early 2018.

To read the rest of this article, please use this link: https://www.bangkokpost.com/business/news/1461170/bcpg-seeks-out-partners-for-green-drive