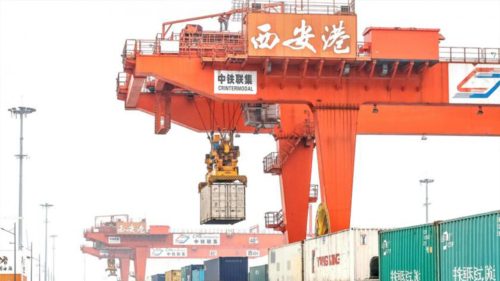 The Xi’an Railway Cargo Container Centre, in Xi’an, Shaanxi Province, China. Many international freight trains begin their routes from the centre, within the framework of China’s Belt and Road Initiative. Xi’an has nine train trade lines from China to Asia and China to Europe.
Photo: EPA/Myanmar Times

The theme for this year’s event, which has been held since 2013, was “Building the Belt and Road, Realising Our Vision for a Community with a Shared Future”.

“China wants to join hands with ASEAN for cooperation, construction, mutual benefits, building,  trade facilitation and people-to-people understanding. We want to cooperate in infrastructure upgrading too. We are trying to have closer China-ASEAN relationships,” said Chinese Vice Premier and a member of the standing committee of the political Bureau of the Communist of China (CPC) Central Committee Han Zheng in his opening speech at the event.

China will start construction work for Belt and Road Initiative in 2021. The project, a global development strategy adopted by the Chinese government involving infrastructure development and investments in 152 countries and international organisations in Asia, Europe, Africa, the Middle East, and the Americas, was proposed by China’s President Xi Jinping in 2013, and has so far garnered the supports of 152 countries. The main goal for the project is for China to promote trade and economic cooperation between the countries of the world by forming an economic corridor stretching from east to west.

During held Belt One Road Forum in Beijing in April, leaders from more than 30 countries signed BRI cooperation agreements. Representatives from more than 150 countries and 90 international organisations also signed more than 280 agreements valued at more than US$64 billion in connection with the initiative.

“China has signed agreements with all ASEAN countries for the project and has also proposed China-ASEAN Strategic Partnership Vision 2030. The China ASEAN Free Trade Area Agreement will come into effect,” said Han.

Although ASEAN leaders have agreed to the BRI project, they say they wish for more initiatives that bring prosperity to both sides.

“I have just one suggestion in implementing the BRI, which is to prioritise BRI proposals and the Master Plan for ASEAN Connectivity and 2025 ASEAN Smart City Network. The establishment of economic corridors must be a push for sector-wide development in trading, investment, tourism, benefits for agricultural products and special economic zone. I hope it will be driven by development for all the countries along the project area especially developing countries. I want it to be of benefit to the people of Laos and the countries along the BRI project area,” Laos Deputy Prime Minister Sonexay Siphandone.

The investments models under the BRI framework can be used in various ways and for cooperation with the private sector, It can be taken as a suggestion for private-sector development of countries in ASEAN depending on the BRI project, said Siphandone.

On the other hand, regional unity plays an important role in the ASEAN economic community and is the reason for sustainable regional economic development. Establishing roads, ports, railroads, financial and banking systems, and power infrastructures between countries are important for growth in trade, tourism, investment and interaction between people, said Myanmar Vice President U Myint Swe.

“China-Myanmar cooperation brings economic benefits and projects are carried out in accordance with Myanmar’s national plans and priorities with socially responsible and environmentally conservative models. We need to find methods for balanced and compatible cooperation for ASEAN Blueprint 2025 and China’s BRI project. Compatibility between prioritised projects will develop bilateral and regional trade. It will also develop interaction between ASEAN and China. We hope for cooperation with mutual benefits and expect to find opportunities for universal prosperity,” U Myint Swe said.

To read the rest of the article, please use this link: https://www.mmtimes.com/news/bri-project-set-benefit-asean-countries-observers-leaders-say.html