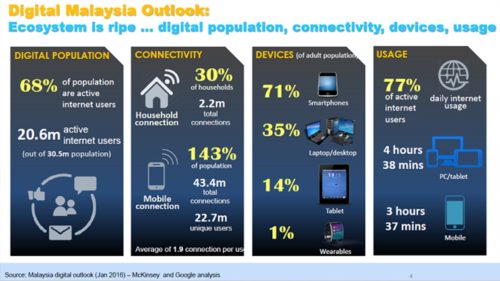 A 2016 analysis by McKinsey and Google showed that the Malaysian ecosystem was ready for takeoff. It has since then lived up to the potential.
Source: Digital News Asia/Mckinsey/Google Analysis

Malaysia is already doing quite well as an economy that is transitioning to a digital economy. One measurement of this progress is the portion of GDP that comes from digital services and products. This hit 18.3% of GDP in 2017, according to the Department of Statistics Malaysia (DOSM). The target is to contribute 20% of GDP in 2020 and that seems to be a target that will be surpassed.

The government and its key institutions also recognize that digital adoption is, at its heart, about economic development. Bank Negara’s Annual Report 2017 states that digital transformation could provide a boost of between US$100 billion to US$136 billion (RM412 billion to RM561 billion) to the country’s GDP by 2025.

And more recently, on a Saturday morning briefing, the day after Budget 2020 was unveiled on 11 Oct, the key takeaway from Surina Shukri, chief executive officer of Malaysian Digital Economy Corporation (MDEC) on the budget was its focus on accelerating digital adoption by business and society. That and the fact that the budget was making the point that, “Digital is the economy!” she exclaims. “We’re super excited about this drive to accelerate adoption through the various initiatives announced, including the focus on talent with emphasis on TVET education as well.”

He highlights the various incentives and grants announced to encourage businesses in both the manufacturing and services sectors to pursue digitalisation and automation. “This encourages the adoption of new technology, as well as the reinvestment and upskilling of the workforce that will increase productivity and efficiency.”

Equally pleased with the automation incentives was Madani Sahari, chief executive officer of Malaysia Automotive Robotic and IoT Institute (MARii). In his post-budget comments, Madani said: “The government has taken a step in the right direction in spurring smart manufacturing, particularly in incentivising the adoption of automation technology to boost productivity and quality.”

He noted that the increased allocation for technical and vocational education and training forms an essential building block for a sustainable technological ecosystem that will need less of a reliance on low skilled migrant labour as well.

Jagdev feels that, these measures, coupled with a more customer-centric approach in attracting and facilitating these investments through InvestKL and MIDA, as well as the expeditious process of approval will hopefully differentiate Malaysia from its neighbours.

To read the rest of the article, please use this link: https://www.digitalnewsasia.com/digital-economy/budget-2020-accelerating-transition-digital-economy