This time, a week ago, we had the chance to be part of Microsoft’s IoT Day for Manufacturers in KL.

The theme was “Accelerating Digital Transformation for Manufacturing” and it was a strong turnout. Participants learnt from international case studies on how they could enable IoT for their own company and there was a robust Q&A session. 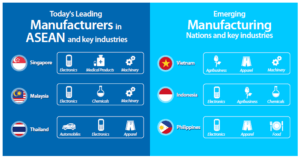 What we found in the last year was that expectation for IoT in manufacturing are mainly centered around its impact on lowering operating costs.

A report by McKinsey in 2014 found that even while economies in the ASEAN region are at vastly different stages of development, new technology like IoT could increase profit margins and lower costs in manufacturing, potentially creating US$25 billion to US$45 billion of annual economic impact in ASEAN by 2030.

Many of the manufacturers we spoke with in 2016 agreed that this was their main motivation. Mr. Nguyen Quoc Khanh, Executive Director R&D, Vinamilk said that they were able to use technology to become the world’s most advanced automated and integrated dairy plant, increasing their efficiency to produce 400 million litres of milk in the first phase and up to 800 million litres of milk a year ultimately to meet the demand for dairy in Vietnam and Asia.

But aside from increased efficiency and decreased cost, can the manufacturing and industrial sector in Southeast Asia utilise IoT to move up the value chain?

In another report by McKinsey on Manufacturing the Future, five broad groups with very different characteristics and requirements were identified.

Is it possible for us to increase the “value density” of manufacturing in Southeast Asia? What are the challenges and how long will such a process take?

These will be some of the questions we will be asking our enterprises in Southeast Asia in 2017 as we move from educating them about the benefits of IoT to addressing their pain points in their IoT strategy and implementation.

Do let us know if you have a story to share and we look forward to accelerating IoT adoption among enterprises in Southeast Asia.

If you are interested in understanding more about the adoption of IoT in different verticals and sectors in ASEAN, please do not hesitate to contact me. We will be holding the 12th edition of Asia IoT Business Platform in Singapore on 14 February 2017 to present the latest IoT developments in the region.