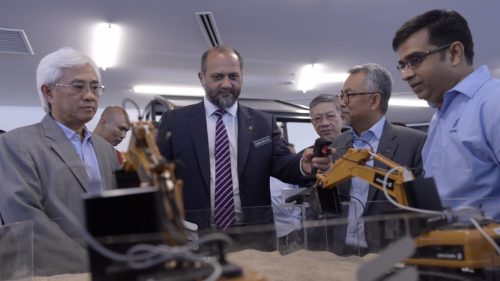 Celcom Axiata Bhd will be investing RM100 million for the next five years to develop its Internet of Things (IoT) infrastructure in the country.

The investment marks the telecommunication firm’s commitment to keep up with the transforming industry, in line with the Industry 4.0, said CEO Mohamad Idham Nawawi.

“Among Celcom’s new IoT venture is a centre of excellence (CoE),” he told reporters after the launch of Celcom’s new headquarters in Kuala Lumpur yesterday.

“The new headquarters, named @celcom, will house an academy, a new virtual academy and the CoE, and we are very proud of it. We have come a long way since our first base station in 1988,” he said.

He said Celcom’s IoT initiatives will include smart cars, smart cities and homes, as well as smart metering and sensors.

“The recently launched Proton X70 is a testament to our efforts of integrating technology into what we use every day. The car is powered by our Celcom network.

“We are also going to use robotics and artificial intelligence to improve and automate our daily work processes, including customer service, marketing and even human capital,” he said.

Meanwhile, Communications and Multimedia Minister Gobind Singh Deo, who launched the new headquarters, has pledged to resolve all issues pertaining to connectivity in the near term.

He said since the new government took over in May 2018, the ministry is committed to upgrade the infrastructure, aimed to provide Malaysians with world-class broadband.

To read the rest of the article, please use this link: https://themalaysianreserve.com/2019/01/11/celcom-axiata-allocates-rm100m-for-iot/