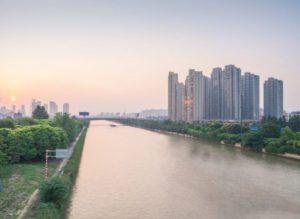 China builds an IoT project like no other along a 1,400km stretch of canal that has been almost six years in the making.

A glut of new internet of things (IoT) technologies are announced every January as thousands of people descend on tech trade show CES in Las Vegas.

While many won’t necessarily bring any benefit to humanity (such as a connected shower), some other deals offer a bit more promise. One such example is Irish tech firm Cubic Telecom revealing that it is working with Qualcomm to develop new capabilities for the cars of tomorrow. Cubic Telecom, which counts both Audi and Qualcomm as investors, said that it is working on exploiting the application processing and wireless capabilities of Qualcomm Snapdragon automotive modems.

Outside of the hustle and bustle of CES, hardware researchers revealed a way to cheaply and quickly develop graphene sensors for use in IoT humidity sensors. The device requires no battery source as it harvests power from the receiver, making it more than ideal for the IoT space, where minimal maintenance and passive readings are essential for tasks in smart cities.

The great IoT wall of China is underway

China is not shy when it comes to massive infrastructure projects, and one of its latest aims is to utilise IoT on a scale seen almost nowhere else on the planet.

In a piece highlighted by IEEE Spectrum, China’s South-to-North Water Diversion project comprises three artificial canals, each of which is more than 1,000km long. The IoT element comes in at the middle of the three canals and contains more than 100,000 individual sensors across a distance of 1,400km.

Planning for the network began in 2012 and is led by Yang Yang, director of the CAS Key Labratory of Wireless Sensor Network and Communication at the Shanghai Institute, who knew going into it that there would be many, many challenges.

But, nearly six years later, the network has successfully scanned the canal for problems such as structural damages or intruders as well as its water quality and flow rates. “This system benefits more than 50m people daily, not mentioning the people along the project,” Yang said.

China to drive accelerated growth for cellular IoT in 2018

Sticking with China, market analysis of the country’s wider IoT infrastructure shows that growth for cellular IoT will accelerate in 2018.

The findings from Berg Insight estimate that the global number of cellular IoT subscribers increased by 56pc during 2017 to reach 647.5m, and should reach 1bn by the end of this year. By 2022, there is expected to be 2.7bn IoT devices connected to cellular networks worldwide.

To read the rest of this article, please use this link: https://www.siliconrepublic.com/machines/iot-china-canal-t-mobile