The first change of digital landscape in Myanmar can be said to have been brought about by two countries: Norway and Qatar.

With the help of the international telcos, telecommunications infrastructure has been strengthened, with ever-increasing demand. This led to one of the neighbouring countries to come in and build the fourth telco of the country: that was Vietnam.

Myanmar is one of the last untapped mobile markets; hence, recent developments have invited foreign service providers to take an interest in the country. Some countries displaying increased interest in Myanmar’s digital landscape include:

In 2014, Canadian Embassy was officially opened in Myanmar. Starting from this year, Canadian Government has agreed to assist Myanmar in development, particularly focusing on women, rural areas and young people.

In addition to increased involvement in social, security issues and trade volume between the two countries, we have also been seeing Canada’s IT industry interest in Myanmar. Communicast Myanmar 2014 saw 3 Canadian IT companies, but 2015 and 2016 comprised a pavilion with around 6 solution providers participating in the development of Myanmar’s ICT industry. 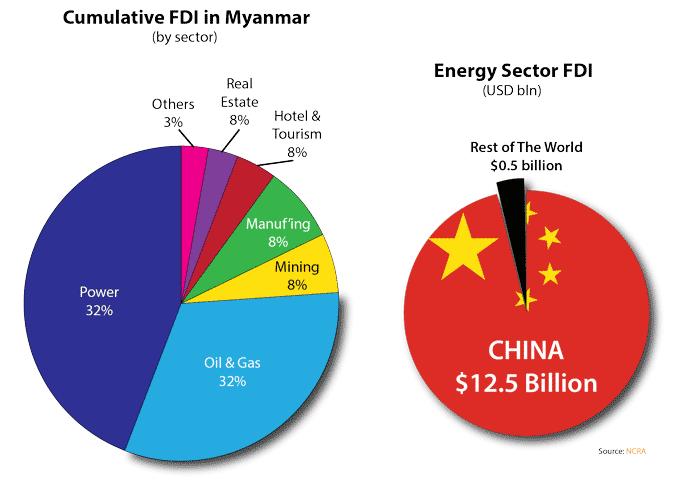 China may be Myanmar’s closest ally, being the largest investor with USD 18.53 billionas of January 2017.

The biggest investment in Myanmar comes from power. Myanmar has been electrically challenged for more than my lifetime. I can honestly say that my childhood was mostly spent in the dark.

Yunnan province’s surplus in power has been sent to eastern China, Vietnam and Laos. Thus, now, Myanmar government is also reviewing to buy electricity from China.

In light of this recent demand from the government, 3 Chinese state-owned companies proposed to plug Myanmar’s power grid into Yunnan’s electricity network.

The Chinese private energy sector also moves forward on its own. Just last week, XMH Holdings went into a joint venture with Myanmar MarcoPolo and Bulox Power. Their current focus is on transformers and generators but XMH intends to extend the product line to power solution products as well as service maintenance.

Apart from energy sector, in 2016, Yangon Regional Government  awarded the tender for installing the city’s first automatic traffic light control system to a joint venture between China Railway Construction Company (CRCC) and Myanmar’s Shwe Yin Co.. The project has been allotted $20 million by the government.

“We look to you [Singapore] to advise us, and to make our country vibrant not just politically but economically,” said State Counsellor Aung San Suu Kyi.

As of March 2017, Singapore’s FDI in Myanmar has amounted to USD 4.3 billion.

Singapore infocomm Technology Federation (SiTF) has also been actively involved in bringing Singapore solution providers to increase their profile in Myanmar through participation in many local exhibitions such as Communicast, satellite and technology expo, Myanmar Water, Security expo and many others.

In 2014, Thailand was Myanmar’s next biggest investor with USD 10.11 billion. Thailand’s main target is to meet the demands of the millennials of Myanmar in terms of the changing lifestyle induced by technology and modernisation according to the consulting firm, Envirosell Thailand.

Thai IT companies have also been seen to seek partnerships with local solution providers to offer their products and solutions ranging from CCTVs, internet broadband to cloud services, and increase presence through participation in IT shows and expos in the local market.

In 2016-2017 fiscal year, Vietnam became the second largest investor of Myanmar, with its recent win at becoming the 4th nation-wide telecoms operator.

Another Vietnamese company named FPT Corporation also won the tender by Myanmar Ministry of Transport and Communications to establish the nation’s software and hardware of web portal. The first part of fiber infrastructure development will require the firm to invest a capital of USD 50 million up till 2018. The tech company is currently looking for a potential local partner that can handle civil works of the project.

VIetnam has definitely ramped up its profile in Myanmar during the past couple of years.

To improve economic relations in Myanmar, Europe, America, France, Britain and Australia have established non-profit membership organisations in Yangon. Their aim is to help their local community become acquainted with Myanmar market.

Strong relations between Myanmar government and other countries could indeed lessen the distrust that has built up on the political and economic landscape of Myanmar. As the Myanmar government also loosens the regulations for FDI, this could be the right time for international solution providers to get a foothold in Myanmar.

Currently, our solution providers represent 4 countries: Myanmar, Thailand, Indonesia, China. With that said, don’t be the only company in your country to not be represented at 18th edition Asia IoT Business Platform, happening on Nov 23-24 in Yangon. For more details, drop me a line at [email protected]