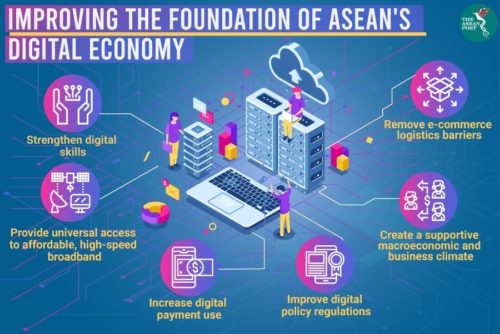 A few days ago, ride-hailing firm Grab unveiled an ambitious plan to invest US$500 million in Việt Nam over the next five years, just a month after it announced an investment of $2 billion into Indonesia.

Grab’s investment decisions are manifestations of the potential development of the digital economies of the two ASEAN countries which have “similar characteristics” as stated by Grab’s president.

These two nations are seen as holding the most promise due to their youthful, internet-savvy population and emerging middle-class.

Indonesia is set to become Southeast Asia’s largest digital economy over the next few years while Việt Nam is also working on a project of national digital transformation which will position itself as a leading digital economy of ASEAN by 2030. The project is scheduled to be submitted to the Government for approval in November this year.

The signs of digital transformation are not only evident in Indonesia and Việt Nam. Other countries in the ASEAN region have already embraced this digital revolution.

On a national scale, Malaysia established the world’s first Digital Free Trade Zone in 2017; Singapore has implemented its own Smart City initiative; while Thailand also has plans to develop digital capacities in all economic sectors.

On a regional scale, all member countries signed several agreements to drive ASEAN toward the Fourth Industrial Revolution (Industry 4.0). Notably, the first e-commerce agreement, reached in 2018, is expected to realise the region’s potential growth of digital economy.

The region’s digital economy is projected to hit $200 billion by 2025 while the e-commerce sector alone is forecast to reach $88 billion.

A report by ATKearney company also shows that despite lagging behind in the digital economy, ASEAN has the potential to enter the top five digital economies in the world by 2025. Implemen­tation of a radical digital agenda could add $1 trillion to the region’s GDP over the next 10 years.

Digitisation and digital transformation is an obvious path for ASEAN countries to catch up in Industry 4.0 and leapfrog their economic growth as no single country could now count on the advantages of natural resources or cheap labour. To move up the ladder of development, they have to pursue a knowledge, technology and data-driven growth model.

However, it does not make sense to reach a faster growth rate but create more inequality. The application of digital technology must be for inclusive development, which is embedded with “the leave no one behind” principle.

On the one hand, digital technology creates new ways for people within one country and people within ASEAN to connect with each other, to do business, to trade and to access services more easily.

Physical distance is now shortened thanks to high-speed broadband and 5G technology. People living in remote areas can access new sources of information and new opportunities such as telemedicine and online education. This could result in more inclusive forms of growth, given the high cost of moving goods and services around disadvantages and isolated communities.

On the other hand, the target of leaving no one behind is challenged by technology. While the fear of widespread job losses may be exaggerated, the future economy will inevitably require greater human capital. Demand for skilled workers will increase their wages, encouraging skill acquisition.

But the region needs concrete steps to increase access to skills training for everyone within ASEAN by developing modern educational and training infrastructure. Some low-skilled workers may be unable to survive slower growth in low-skilled jobs, which will require social protection policies.

Investing in education and upskilling or retraining is one of the indispensable ways to ensure the impact of new technologies will not lead to greater inequality.

Still, there are concerns over the digital gap between urban and rural areas in a country as well as between the more developed and the less developed ASEAN countries.

The digital divide is prevailing not only in terms of online infrastructure but also in the adoption of digital technology in public and private sectors.

To read the rest of the article, please use this link: https://vietnamnews.vn/economy/534979/digital-economy-for-an-inclusive-asean-community.html#FcKQKA1dd5pAmQQS.97