Day 1 of the 32nd edition of Asia IoT Business Platform in Jakarta, Indonesia demonstrated opportunities for local digitalisation within the enterprise space, with conversations across various aspects of digital transformation from the four main segments of local  IoT stakeholders: Dr. Ismail, the Director-General of Post and Informatics Resources and Devices, Ministry of Communication and IT opened the industry gathering, sharing the perspective of the government on IoT adoption and enterprise digitalisation in Indonesia. Dr. Ismail shared that IoT regulations have been implemented, especially device standardisation and IoT network frequency for both licensed and non-licensed spectrum, including LoRaWAN. He confirmed that the other minor details on the regulations related to IoT will be finalised this year.

Dr. Ismail believes that IoT is one of the major tools of enterprise digitalisation and due to its data-gathering nature, it has so much untapped potential. He gave examples on how IoT has played an important role in several initiatives in Indonesia including Smart City and Industry 4.0. The Indonesian government has been making  infrastructure investments in the country, including the finishing of Palapa Ring Project (connectivity infrastructure across Indonesia) and completion of a number of ports as well as airports – Dr. Ismail strongly encouraged solution providers and telcos to play a role in upgrading this basic infrastructure into smart facilities through IoT where it can enhance customers’ journey and contribute to better economic growth.

Dr. Ismail as well as Pak Masrono Yugihartiman, Head of Intermodal Transportation Research, Ministry of Transportation believes that the role of government in the digitalisation ecosystem has shifted – government should not act exclusively as regulator and policymaker, but instead should be the facilitator and accelerator of the ecosystem. Both of them welcomed local stakeholders to give inputs on how they can assist both technology providers as well as enterprise end-users. Focusing on customer service and improving efficiency, Kimia Farma’s Digital Transformation program integrated front to back operations, from the manufacturing floor to retail operations, leveraging on IoT for their manufacturing plants to drive efficiency and product quality as the backbone of their “Digital Healthcare” ecosystem.

Pertamina embarked on its Digital Transformation journey after identifying more than 100 pain points from its teams. With a focus on operational efficiency, some of the subsequent digital projects such as standardizing and implementing digital tools for procurement across the entire Pertamina organisation and digitalization of refinery operations.

Joining the discussion on how we can drive enterprise digitalisation in Indonesia, experienced solutions providers including Dell Technologies, Infineon, Fujitsu, N’osairis, Talend, Everynet and Qlue contributed a number of latest successful case studies they have had both within Indonesia, and the region, to attendees. 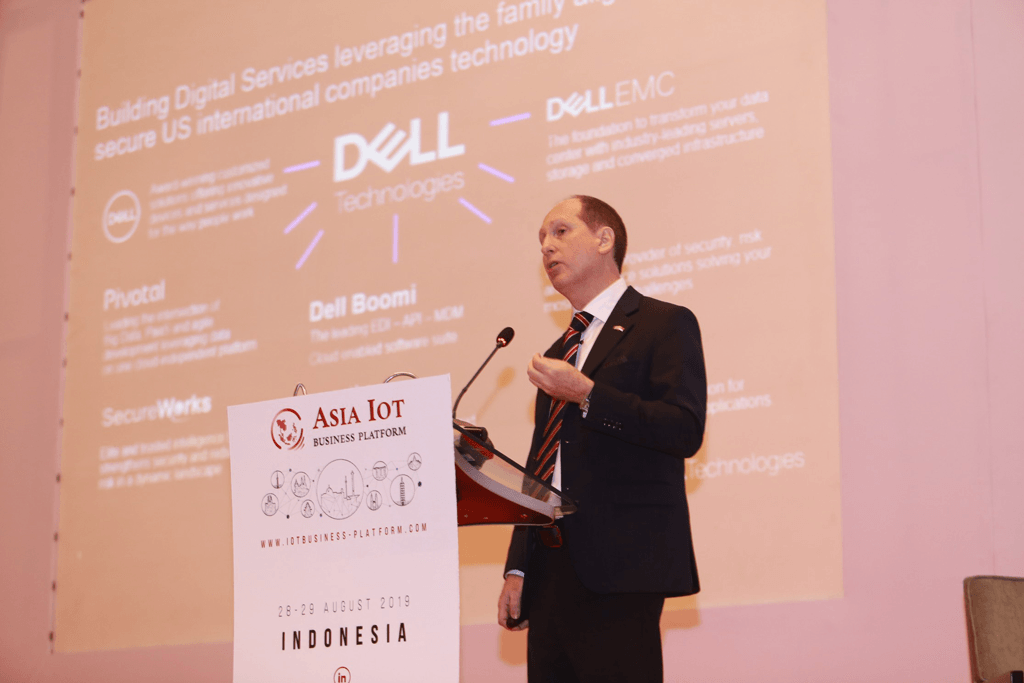 Telcos in Indonesia, building a role of a hub beyond just connectivity in the IoT ecosystem, are also very upbeat on the development in the local market.

“Telkom has realized the importance of digital transformation in Indonesia and has been taking proactive steps to transform internally as well as to assist local enterprises in pursuing digital transformation and IoT projects, some of which are shared during Asia IoT Business Platform. Telkom will play an active role in supporting government key initiatives including Indonesia 4.0, smart city and digital economy creation,” explained Joddy Hernady, SVP – EGM Digital Service Division of Telkom Indonesia.

“We are delighted to be taking part in Asia IoT Business Platform which supports our vision and strategy to become the leading and preferred IoT provider in Indonesia. We believe that IoT implementation in the area of intelligent transport & logistic, Industry 4.0, and Smart City will drive business and economic growth leading to better society,” said Intan Abdams Katoppo, Chief Business Officer of Indosat Ooredoo. “To accelerate IoT & digital transformation in Indonesia, Indosat Ooredoo has actively conducted co-creation principal partnering universities to fasten deployment and create a relevant solution in the market too,” she added.

Do drop me a note at felix@industry-platform.com if you are interested to know more and be involved in the enterprise digitalisation ecosystem in Indonesia.