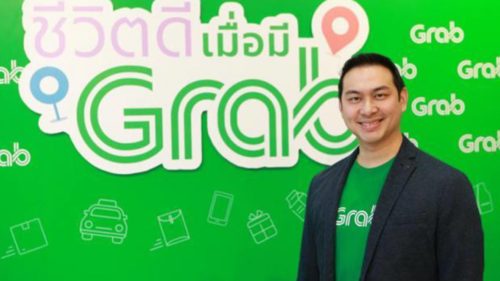 Mr Tarin says the number of Grab drivers in Thailand has doubled in the past 12 months.
(Photo: Bangkok Post)

Ride-sharing service Grab plans to expand to key areas in Thailand in 2019, most notably Chiang Rai, hoping to achieve nationwide service in the next 2-3 years, a goal that could be expedited by the upcoming election.

The company expects the election to produce favourable results, said Tarin Thaniyavarn, Grab’s Thailand country head, as major political party representatives have made positive statements about Grab and the sharing economy at large.

Although Grab does not release specific numbers regarding their five years of operation in Thailand, Mr Tarin said the number of drivers has doubled in the past 12 months. The company also expanded to food deliveries in December 2017 and in the first 10 months of operation made 3 million deliveries from 15,000 merchants. At least 15% of Grab’s business in Thailand comes from tourists.

“Thai customers are the most sophisticated customers in Southeast Asia, period,” Mr Tarin said. “Just by the level of engagement on social media, and Bangkok is almost the No.1 city in the world in terms of using Facebook. Thais want to embrace this concept more than anyone.”

The main political issue Grab wants resolved by government, and what is hampering expansion efforts, is legalisation. Though Grab operates in 16 provinces and 19 cities in Thailand, paying for a ride from an unlicensed driver is still technically illegal, and some Grab drivers have faced fines by police. In every other Southeast Asian country Grab operates in, ride-sharing services are legal.

The legalisation issue has made expanding throughout Thailand difficult. Mr Tarin said that if the legalisation question were resolved, Grab could make its services available in as little as six months.

Grab still has an idiosyncratic relationship with the government. Despite not being technically legal in all aspects of operation, Grab works “extremely closely with the Thailand Tourism Authority” and the Transport and Labour ministries, Mr Tarin said.

Grab has received positive signals from many political parties participating in the coming election. Recently the Bhumjaithai Party posted a video to social media of its leaders sitting in a Grab car and interviewing Grab drivers.

“This was the first time there was consensus across three big parties in Thailand — that the benefits from the sharing economy are massive for the country and the people,” he said. “They said there must be a change in how we move on this.”

Mr Tarin expects the momentum towards legalisation to be in Grab’s favour no matter who wins the next election.

To read the rest of the article, please use this link: https://www.bangkokpost.com/tech/local-news/1608654/grab-awaits-legal-progress-amid-domination