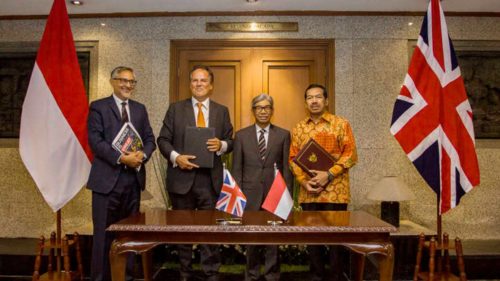 Jakarta. As Great Britain prepares to leave the European Union, it seeks to strengthen relations with Southeast Asian countries. With Indonesia it agreed on Tuesday (14/08) to cooperate more closely on trade, cybersecurity and maritime affairs.

Deputy Foreign Minister A.M. Fachir received in Jakarta the UK’s Minister for Asia and the Pacific, Mark Field, to discuss ways to strengthen relations. “We’ve agreed to find creative ways in an effort to increase cooperation, especially in trade,” Fachir said, adding that trade balance between the two countries in the past five years did not reflect the potential that was there.

Indonesia-UK trade was worth between $2.5 trillion and $2.7 trillion a year in the 2013-17 period, according to data from the Ministry of Trade.Post Britain’s departure, known as Brexit, the Forest Law Enforcement, Governance and Trade (FLEGT) agreement, which Indonesia already has with the EU, will still apply. It is gives importers a guarantee that Indonesian timber and its products are legally sourced.

The two countries are also going to strengthen cooperation in the maritime sector.

During his visit to Indonesia, Field also signed a memorandum of understanding with Djoko Setiadi, chief of the National Cyber and Encryption Agency (BSSN), on cybersecurity cooperation.The agreement covers capacity building and exchange of expertise on cybersecurity strategies.

To read the rest of the article, please use this link: http://jakartaglobe.id/news/indonesia-uk-agree-to-strengthen-relations-in-cyber-security-trade/