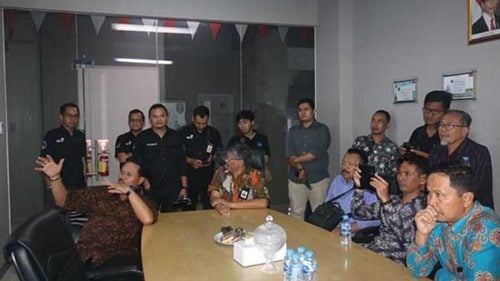 Mayor of Madiun Maidi along with the ranks of representatives of Regional Devices Organization (OPD) of the City Government of Madiun listening to the solutions provided at the Smart City Nusantara Living Lab.
Photo: IndoTelko

PT Telekomunikasi Indonesia Tbk (Telkom) introduced the archipelago smart city platform to the City Government (City Government) Madiun as one of the cities included in the 100 Smart City Movement.The movement towards 100 Smart City, has been carried out in stages from 2017 and 2018 which has been implemented in 75 districts / cities through mentoring the preparation of smart city master plans. Currently, it will resume again in 2019 with 25 districts / cities being chosen as the target of the Movement towards 100 Smart Cities by 2019.“The Smart City Nusantara Living Lab recently received a visit from the Madiun City Government attended by Mayor Madiun Maidi along with representatives of the Regional Government Organization (OPD) of the Madiun City Government and accompanied by Account Manager Telkom Regional 5, Irma,” said Smart City Nusantara Senior Manager Wahyudi , recently.

He revealed, during a visit held on May 14, 2019, officials from Madiun City Government were introduced to smart city solutions in 4 zones in Smart City Nusantara Living Lab, namely Smart Government Zone, Smart Industry Zone, Smart Citizen Zone, and Smart Infrastructure Zone.“We hope to help the City of Madiun in realizing smart city so that it can support the development of the City of Madiun for the better,” he said.

To read the rest of the article, please use this link: https://www.indotelko.com/read/1558392571/madiun-smart-city-nusantara