Minister of Information & Communications (TT&TT) Nguyen Manh Hung had discussions at the Conference on Cooperation in Information Technology and Communication organized in Phu Yen on August 22.

At the opening day of the workshop on August 22, Minister Nguyen Manh Hung said that when implementing the digital transformation, there was no need to think about far-fetched issues, just think about solving problems related to oneself and family; our family, our village; relate to our business, our organization, then think about national and global issues. 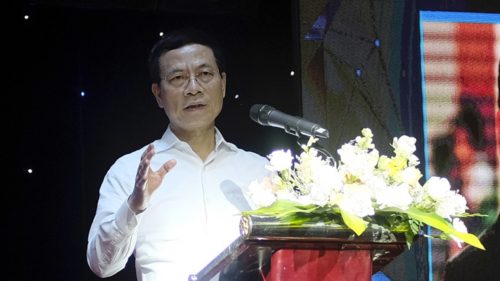 “Thinking about how to get our mother to sell bananas faster, harder, and more profitable is already good. By thinking like that, digital transformation will happen faster,” Hung said.

Similarly, the Minister said that Vietnam needs hundreds of thousands of small entrepreneurs, 5-10 people, to go into solving everyday problems of life, on a small scale, in villages, commune, province, the number conversion process will take place very quickly.

With less burden, Vietnam will go faster in the fourth industrial revolution.

Vietnam has not gone through three previous revolutions, the experience is not much, if a certain angle is seen as an advantage, Minister Hung affirmed.

“Many people think that they must have a past foundation to go faster, but when the revolution happens, often those with less past experience will go faster. Past success is sometimes a burden,” the minister said.

For example, a network that already has 2G, 3G, and 4G infrastructure, now requires to build an expensive 5G platform, it will be very disturbing. However, a brand new operator who has never invested in anything can jump into investing 5G immediately without thinking, so it will catch up very quickly.

Or an infrastructure that has been invested for many years, costing thousands of billions of dollars, is operating well but needs to be removed to build for Industry 4.0, it will surely be difficult to make decisions. However, if a brand-new organization has no previous foundation, it will be more willing to invest in new technology.

In terms of knowledge, successful countries and organizations will form an intellectual system. Whether or not those experiences and knowledge can be used for the future will be a problem. Meanwhile, to do revolution, sometimes we need to think backwards. Those who have not had previous success problems will acquire new knowledge faster.

The minister used an example of  Japanese having a mindset of not being allowed to do wrong things, so Japanese electronic products are of perfect quality, sold all over the world.

Nonetheless, we are still in the early stage of industry 4.0 and mistakes on a small scale now are still acceptable. For Japanese people, for example, it is more difficult to accept mistakes, while Vietnamese people will easily try and make mistakes, drawing lessons quickly.

Contacting to Phu Yen, the Minister said that this land is far away, investors have not approached it yet which can be an advantage. Because this province is still preliminary, there is still “land”, and it has not been invested heavily. With such a spacious space that has not been exploited so largely, Phu Yen can plan to test new better things.

“Or testing unmanned cars for example. Phu Yen will be a lot better than Hanoi. There is not much to worry about here, as in Hanoi, and to test the actual environment, ”said the minister.

Or to equip the Phu Yen people into digital citizens, the Minister said that only two things need to be developed: increasing the rate of people’s smartphone ownership and promoting e-government. By addressing these two problems, the province’s digital transformation will take place faster.

To read the rest of the article, please use this link: https://vietnamnet.vn/vn/thong-tin-truyen-thong/chuyen-doi-so-la-lam-cho-cuoc-song-cua-minh-cua-ba-me-minh-tot-dep-hon-561071.html