ASEAN will grow into the world’s 4th largest economic bloc by 2030. ASEAN’s changing demographics, geopolitical shifts and favorable government policies provide the foundation for ASEAN states to capture growth in the industrial & manufacturing sector. We would discuss how a combination of factors, such as the growth of domestic consumption, geopolitical tensions and a strong network of Free Trade Agreements provide support to the ASEAN manufacturing growth story.

ASEAN Governments have acknowledged the fundamental shift that is taking place in the technological landscape and have been rolling out various schemes and policies to encourage enterprises in their countries to adopt industry 4.0 technologies. This highlights the increased opportunities that enterprises in manufacturing (and enterprises in active adjacent activities, eg. logistics, supply chain, industrial real estate, etc) have in collaborating with digital technology solution providers to take their business to the next level.

The report will also provide an insight into the attitudes that ASEAN enterprises in industrial sectors take towards adopting digital transformation. In addition, the 3 case studies discussed at the end of the report would give an idea of the types of projects that ASEAN enterprises are implementing as part of their Digital Transformation journey.

ASEAN is poised to be the world’s 4th largest economic bloc by 2030, according to the World Economic Forum (WEF). ASEAN’s working-age population will increase by 40 million by 2030, with Indonesia contributing more than half of workers. By comparison, China’s working-age population is expected to be reduced by 30 million in the same period. By 2030, ASEAN will contribute 140 million new consumers, representing 16% of the world’s new consumer class as income levels are expected to grow annually by 6%-8%, creating economies powered by the middle class. Favorable demographics and rising income levels will drive domestic consumption which powers about 60% of ASEAN GDP today, to double to USD 4 trillion by 2030.

Leading British company Dyson, which has a production plant making electric motors in Singapore as well as manufacturing hubs in Malaysia and the Philippines, announced its intention in 2019 to relocate its corporate headquarters to Singapore. Leveraging on Singapore’s expanding high-tech port, Dyson looks to facilitate the company’s links to the automotive supply chains of Malaysia, Japan, Thailand, South Korea and China. Dyson’s move reflects the growing importance of ASEAN as a manufacturing powerhouse of the future serving regional and international markets.

Trade friction between US and China escalated in 2018, and a Economist Intelligence Unit (EIU) report subsequently predicted that this will likely result in a significant shift in export oriented manufacturing from China to other markets in Asia. With China’s salary levels being higher than in most ASEAN countries, the trade disruptions between US and China are making the region an attractive alternative or supplementary manufacturing base for multinationals as they seek to rebalance supply chains to diversify geopolitical risk and take advantage of low cost labor. As these supply chains begin to shift, ASEAN countries will be a net beneficiary in terms of manufacturing processes for consumer products including cellular phones, laptop computers and apparel.

In line with EIU’s predictions, FDI inflows to the ASEAN, have been on an increasing trend reaching USD154.7 billion in 2018. Manufacturing accounted for 35.6% of inward FDI in 2018. FDI flows from other service related industries, such as wholesale retail trade, real estate activities and financial and real estate activities have dipped between 2012 to 2018. According to Forbes, a 2018 survey of U.S. firms manufacturing in China found that 18.5% had either moved production to Southeast Asia or were considering it.

At the end of 2019, it was widely thought that tensions were easing with a phase 1 trade deal being signed between US and China. However, this was short lived as the early stages of the COVID-19 pandemic unfolded and stringent shutdowns in China disrupted supply chains and accelerated the urgency for global enterprises to develop alternate supply bases, to ensure continuity in their business. As the COVID-19 situation developed further, geopolitical tensions between US and China are starting to flare again, feeding further into the trend of supply chain rebalancing.

While labor costs have been a fundamental driver of shifting manufacturing to Southeast Asia, this isn’t the only factor. Production in the majority of industries is incorporating new technology and smart automation. Starting up a new factory in ASEAN will provide the opportunity for global manufacturers to start fresh instead of upgrading/retrofitting their old facilities. This can also be seen in policy initiatives driven by local government agencies to encourage local companies to adopt digital/industry 4.0 type technologies.

In the 2019 AIBP ASEAN Enterprise survey, more than 650 enterprises in the manufacturing and industrial segment from Indonesia, Thailand, Malaysia, Philippines and Vietnam provided feedback and an opportunity to understand their attitudes towards digital transformation.

When compared against other industries, this segment of respondents ranked the highest in looking to digital technology to achieve cost savings (41.9%). At the same time, most respondents looked at implementing digital technology to improve business processes (76.2%). On average, when implementing technology to improve business processes, 32.4% of the enterprises in this segment expect results to show up between 9 – 12 months and 68% of them expect to see a 50% to 74% improvement in metrics that are being used to measure improvements. 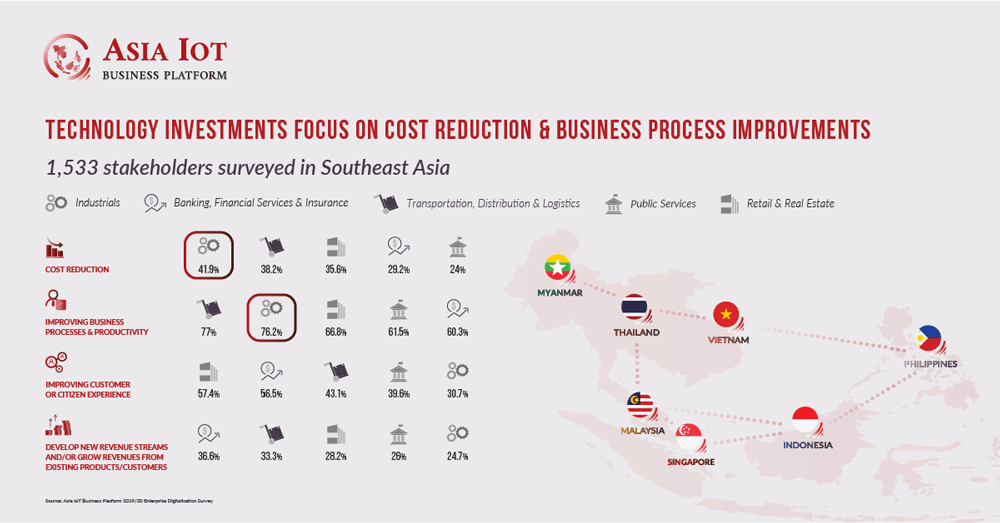