Dubbed as “Asia’s final frontier”, Myanmar is one of the world’s fastest-growing economy, driven by economic reforms, public consumption and steady gains in Foreign Direct Investment (FDI). Myanmar’s economy has been growing rapidly, registering an average growth of 6.8% for the past 5 years.

Being the final frontier, Myanmar’s government has a unique opportunity to learn from regional and international digital government experiences to leapfrog and develop a model that suits the Myanmar local context.

To further develop the local market, the government has implemented several initiatives to digitalise its economy. In 2017, the government formed the Digital Economy Development Committee (DEDC) with the aims of developing Myanmar as a knowledge, digital and innovation hub. As part of the ASEAN Smart Cities Network, Myanmar’s largest cities: Nay Pyi Taw, Mandalay and Yangon, will realise the vision of urban development with digital technology serving as an enabler to resolve urbanisation issues. 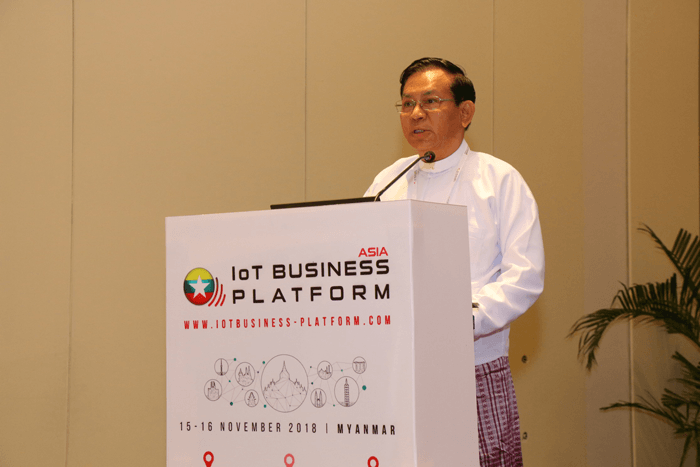 U Soe Thein, Permanent Secretary, Ministry of Transport and Communication sharing government’s main initiatives at our gathering in Yangon in 2018

We have been in touch with the local stakeholders including government, telcos and enterprises for the past 3 years and below is a summary of our discussions on the urban development and smart city initiatives in the 3 above-mentioned cities in Myanmar.

Nay Pyi Taw is the capital city of Myanmar with a population of over 900,000 people. It has been 3 years since Nay Pyi Taw Council of the government being active and as part of the development plan, city cleanliness, healthcare, transportation, electricity, and education are of the top priorities. Over USD$750,000 had been invested to improve transport infrastructures such as building roads and bridges and more than USD$350,000 had been allocated for the education sector to increase the number of schools and teachers.

Being part of the ASEAN Smart Cities Network, Dr. Myo Aung, Chairman of Nay Pyi Taw Council, shared that they working on an action plan that focuses on 3 main areas at the moment:

Myanmar’s historic royal capital, Mandalay, is currently the second biggest city in the country, housing over 1.2 million people. The Mandalay City Development Committee (MDMC) has been very active in driving digital transformation in Mandalay since publicly announcing their smart city dream in 2017 – a 30-year urban development plan has been drawn out as well with a focus on realising a clean and sustainable city.

U Ye Myat Thu, a member of MDMC and Mandalay’s smart city officer, shared that they have been pushing the municipal governments to harness technology over the past 2 years. Many pundits have applauded the pace of change in Mandalay, noting the heavy civilian involvement in the government instead of military as one of the major factors. Some notable projects that are currently being explored and implemented:

With a population of 5.2 million, Yangon is the biggest city in Myanmar and arguably the most important city which economy contributing around 20% of the national GDP. Yangon is administered by the Yangon City Development Committee (YCDC) which is responsible for the smart city initiatives too.

Daw Tin Tin Kyi, Director of Smart City, YCDC, shared at our gathering last year (summary of discussions can be found here) some of the urban challenges that Yangon is facing at the moment including flooding, traffic congestion, utility management, and heritage conservations. During our recent discussion in Yangon, Daw Tin Tin Kyi further shared that her team has been very eager to drive digital transformation to realise a better city and under their smart city plans, these are some of the projects that are being explored: The local governments have been aggressive in inviting private sectors and international partners to be involved in the local ecosystem too – Japan and South Korea are some of the countries which are active in the local market. Recently, Amarta Corp, a large industrial estate group based in Thailand, has also signed a framework agreement with the local government in Myanmar to jointly develop a Smart and Eco-City (2,000 acres for the first phase) in East Dagon township in Yangon. The project will include the development of residential, commercial, office and industrial properties and the investment is expected to amount ~US$1 billion.

The 34th edition of Asia IoT Business Platform will be held on 2-3 December 2019 at Sedona Hotel, Yangon, hosting local smart city stakeholders to have a further discussion on how to collaborate and learn from international successes to drive smart city ecosystem in Myanmar.

Here are some of the leaders who will be involved:

Drop me a note at [email protected] if you have interesting case studies or technology expertise relevant to smart city and e-government projects.