As part of Thailand 4.0, the Thai government has been prioritising development of smart cities nationwide.

In a bid to achieve Thailand’s target of 30 smart cities in 24 provinces by 2020, the National Smart City Committee launched the first call for smart city proposals in March 2019. As part of their transformation process, the city data platform is set to launch this year, and at least 100 e-services are expected to be provided to the public by 2020.

The law for trade and investment in the Eastern Economic Corridor (EEC) was approved by the cabinet in 2018. With the EEC, Thailand hopes to develop its eastern provinces – Chonburi, Rayong, and Chachoengsao – into a leading ASEAN economic zone; a hub for technological manufacturing and services with strong connectivity to its ASEAN neighbors by land, sea and air.

In a recent interview with the Eastern Economic Corridor (EEC) Office, Deputy Secretary General Dr. Luxmon Attapich said that the concentration of industrial investments and the development of transport “will logically, lead to a great movement of urbanisation”.

As such, EEC is being developed into a pilot model for “Livable Smart City”, with Smart City, Smart Growth and Low Carbon City as the key concepts. Within EEC, private companies are allowed to build their own “smart cities” – corporations like PTT, Amata are in planning phases to develop smart city projects at their industrial estates; Other than Alibaba, Hitachi, CP Group, etc., China Development Bank and the Japan International Cooperation Agency (JICA) have also shown interest in EEC investments. Dr. Luxmon will deliver an official address and updates on EEC opportunities at the upcoming Asia IoT Business Platform (AIBP) Thailand on 1 August 2019.

The Thai government has been a strong advocate for Public-Private Partnership (PPP), especially in the area of infrastructure development and digital innovation. In order to facilitate this vision, the Smart City Alliance was formed, with over 80 partners to date.

At the opening address of AIBP last year, Ms Ajarin, Permanent Secretary of Thailand’s Ministry of Digital Economy and Society (MDES), shared about the government’s focus on 6 domains of development. 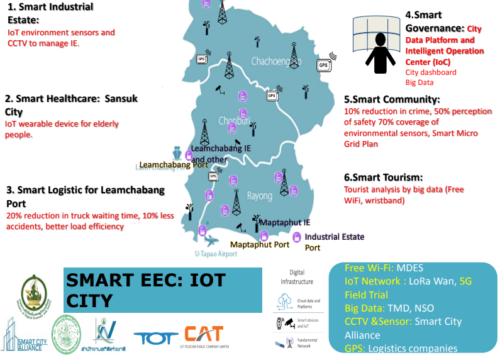 Following key concepts envisioned by the government, we have consolidated a summary of opportunities for solution partners to aid EEC progress: 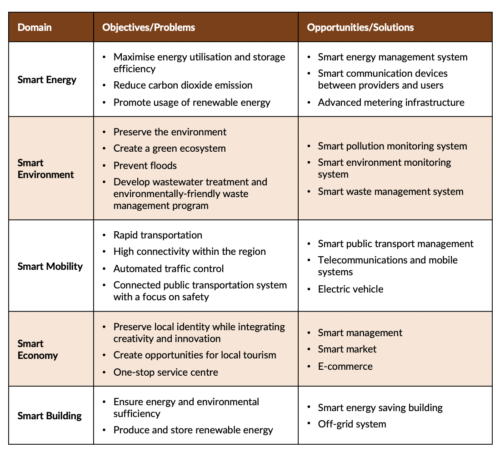 At the 31st edition of AIBP Thailand on 31 July and 1 August 2019, Thailand’s smart city stakeholders will gather to connect with international partners from various cities and have an open conversation on the topic “Realising EEC”.