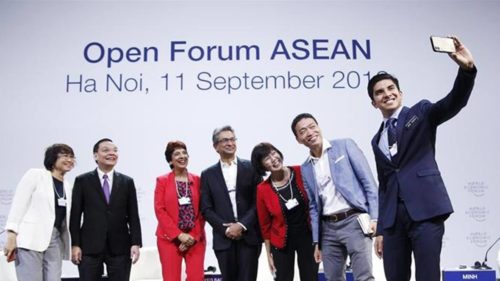 HÀ NỘI – More than 1,000 participants joined the open forum: ‘ASEAN 4.0 for All?’, which officially kickstarted the World Economic Forum (WEF) on ASEAN 2018, on Tuesday morning in Hà Nội.

Speaking at the forum, Vietnamese Minister of Science and Technology Chu Ngọc Anh stressed the importance of the fourth industrial revolution for countries in the region, including Việt Nam.

The minister said: “The fourth industrial revolution presents both opportunities for growth and challenges, especially for the region’s young people. “Việt Nam has high hopes for startups and business to be the driving force for economic growth and sustainable development.”

The minister urged delegates to focus on ideas and initiatives which bolster co-operation between countries in the region as well as with international partners to transform Southeast Asia into one of the world’s start-up hubs. The forum’s discussion panel, which saw the participation of noted figures in education, business and technology, talked about common objectives and challenges for ASEAN countries and how the region can forge ahead through the fourth industrial revolution.

Annie Koh, Vice President for the Office of Business Development and Academic Director of the Singapore Management University said young people across the 10 countries of ASEAN would be the ones who decide the future of the region. “We need to unlock the enormous entrepreneurial skill within ASEAN,” Koh said. She said there was a need to promote an ASEAN identity, an ASEAN way and cross-cultural movement and exchange of students between countries.

Rajan Anandan, Google Managing Director of Southeast Asia and India said the region had enormous potential for digital growth, citing Việt Nam as one of the prime examples for ASEAN’s entrepreneurial spirit. “When it comes to the Fourth Industrial Revolution, at the core of it is a digital economy and when you think about ASEAN with the 10 countries combined, the digital economy is quite sizable and it’s growing rapidly,” he said.

To read the rest of the article, please use this link: https://vietnamnews.vn/economy/465581/wef-on-asean-starts-with-open-forum.html#VEw3F8XaRsc0IVQb.97